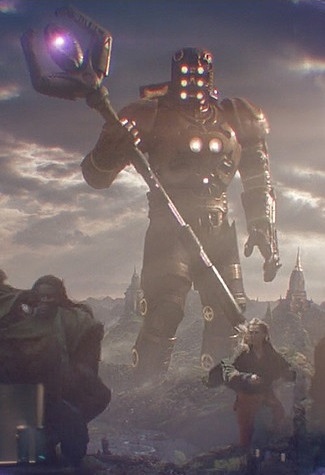 Marvel Universe
The Celestials are a race of beings who stand at 2,000+ft, and exhibit godly powers and abilities.

They are responsible for the creation of Eternals and Deviants, who while popularized by their Earth counterparts as a species that can be found on multiple worlds and include such beings as Thanos of Titan and Maelstrom (although Maelstrom had Inhuman heritage, the Inhumans are a result of Kree manipulation and are also found on multiple worlds).

They take on the appearance of humongous humanoids clad in containment suits/armor, though their true form underneath is not known.

Their origin is shrouded in mystery, but they are known to be one of the oldest and most powerful races in the Marvel Universe. The Celestials spend most of their time creating and evolving life-forms, destroying those they deem unfit. They have made multiple visits to Earth (events known as Hosts) and are one of the multiple reasons that homo sapiens are able to develop superpowers.

It later revealed the Celestials are a faction of Aspirants from the First Firmament that rebelled due to having opposing opinions on the stagnant perfection of their creator, believing in continuous evolution and growth. Their rebellion caused the creation of a second new multiverse that became Eternity. The Celestials colonized this new reality and promoted the growth and evolution of the races and civilizations that inhabited.

Eons later they nearly wiped to extinction by the Beyonders who caused the collapse of the multiverse. After the multiverse was rebooted turning it into the Eight Iteration, Eternity. Some Celestials survived hiding on the fringes of creation. However Logos found them and killed them. Only one was spared, saved by the Queen of Nevers, the lover of Eternity.

When the Eternity Watch engaged Logos and the First Firmament's minions, the Death Celestials, in the Superflow, the Queen of Nevers hearing Galactus's call for the possibility, had the last Celestial sacrifice itself and brought back the Fifth Host of Celestials. They engaged the Death Celestials destroying all taint to Eternity.

Retrieved from "https://aliens.fandom.com/wiki/Celestial?oldid=188355"
Community content is available under CC-BY-SA unless otherwise noted.