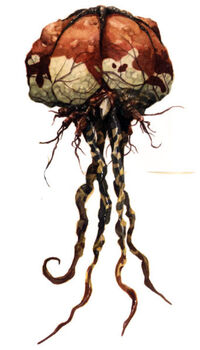 The Celegians are a species oftentimes nicknamed "floating brains" due to their physiological design and incredible intellect. Indigenous to the planet Celegia known of its raging seas that lies within the Expansion Region. They provide their jellyfish-like bodies with locomotion through means of a natural form of telekinesis that functions similar to a repulsorlift. Their massive intellect and wisdom is greatly known within the galaxy.

Celegians breathe cyanogen, which is notably poisonous to most other organisms, with mankind being no exception. However, oxygen is lethal to them, necessitating atmospheric transport chambers to many offworld locations.

Celegian evolution stemmed from ocean-dwelling invertebrates to more recent ancestors which lived on terrestrial environs. Their soft fleshy bodies, great tentacles, and dependence upon life-support chambers made the Celegians look as though they were always swimming or floating. Celegians communicated using a form of telepathy, and had no written or spoken language because of this, indicating that they possessed it at a strong level for a significant portion of their late evolutionary stages.

A relatively isolationist species, they still had good relations with the Galactic Republic. They tend to be explorers, and are often found in the company of other species with similar interests in mind. Those which could be encountered away from their homeworld are usually scouts or diplomats, although a rare few instead chose to train in the ways of the Force.