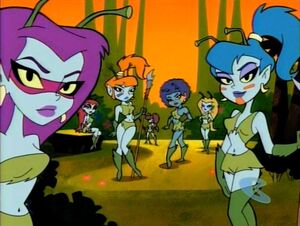 Humanoid (at day)
Insectoid (at night)

Bipedal (at day)
Crawling (at night)

Mix of growls, hisses and clicks

The Catapoids are a sapient race of female shapeshifters which alternate between two forms. During the day, they look like beautiful humanoids. At sunset, they become monstrous, caterpillar-like insectoids.

In their humanoid form they resemble blue-skinned females with elfin ears and a pair of short antennae. Their hair can be purple, blue, red, orange, brown or yellow. Their language resembles a series of hisses and clicks. They seem to require the same environmental conditions as earthlings.

At night, they rip off their skins to reveal a larger, much more monstrous insectoid form with two-fingered hands, an armored slug-like body, a spiked tail, sharp teeth and bulging eyes.

Retrieved from "https://aliens.fandom.com/wiki/Catapoid?oldid=189063"
Community content is available under CC-BY-SA unless otherwise noted.