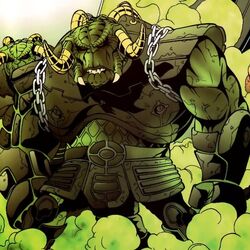 Cowboys & Aliens
The Caste, also known to humanity as Demons, are a spacefaring reptilian species which invaded Earth in the continent of North America in the year 1873. Prior to that, they have also conquered and enslaved numerous other species, including a race of shapeshifters.

The Caste are reptilian creatures, considerably taller, stronger, and more physically resilient than Humans, and also far more muscular, which probably owns to the fact that their homeworld has a naturally higher gravity. They have scaly skin, sharp teeth and horns on their heads, as well as a lizard-like tail. They possess two pairs of arms, one on their shoulders which have massive claws, and one inside their chest cavities. Their internal hands are smaller and more nimble, allowing them to be used to carry out more delicate tasks, unlike their outer hands which are used for combat. Unfortunately, the cavity that houses the inner hands also contains their hearts, meaning that they risk of being fatally shot or stabbed whenever they use them. Their blood is dark green in color.

They can operate in Earth's atmosphere without special equipment and without discomfort, although they find the gravity slightly lower than what they're used to.

The Caste are a xenophobic civilization which believe themselves to be superior to other species. They have conquered numerous worlds and employ members of other races as servants.

When they land on a new world, they've been observed to kill natives to study them and dissect them.

A member of the caste, as it's depicted in the movie.
Add a photo to this gallery

Retrieved from "https://aliens.fandom.com/wiki/Caste_(Cowboys_%26_Aliens)?oldid=202158"
Community content is available under CC-BY-SA unless otherwise noted.