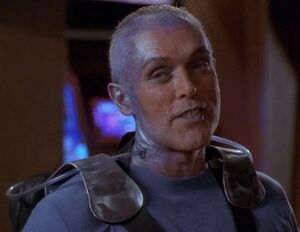 Castalians are a genetically-modified offshoot of humanity which inhabit the planet Castalia and were once members of the Systems Commonwealth. They're an aquatic species which breathes water through gill slits, and need to wear a reverse SCUBA gear to operate on dry land. However, the Castalian Republic also includes a minority of unmodified Human air-breathing citizens.

Water-breathing Castalians look almost entirely Human, but possess gills and silvery scales on the sides of their necks and heads.

The Castalian Republic is ruled by a president and has a population of 20 billion. They're known for having strict formal protocols, including music to be played in specific situations during ceremonies, such as when entering a room, leaving a room, or proposing a toast.

After the fall of the Commonwealth, Castalia was invaded and occupied by Nietzscheans of the Volsung Pride, who enslaved many of them. The Castalians eventually managed to defeat the Nietzcheans and went on to become one of the first worlds to join the New Commonwealth.

Retrieved from "https://aliens.fandom.com/wiki/Castalian?oldid=177664"
Community content is available under CC-BY-SA unless otherwise noted.