Carver of the Glade 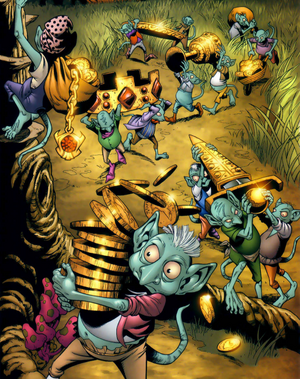 The Carvers of the Glade are a diminutive race native to the planet Quin in the CrossGen Universe.

The Carvers are a small race of green imp-like creatures.

While Arwyn and Gareth visited the Glade, they were impressed by the carvings found throughout the forest. Neven appeared before to reclaim the Bow of Ayden from Arwyn, believing her to be unworthy to defeat Mordath. As the trio argued, several Carvers made off with some of treasure from Arwyn and Gareth's satchel. The creatures were noticed by Kreeg, Arwyn's dog, who attempted to chase them. They fled with their booty into one of the carved trees.

Kreeg's outburst was noticed by the humans, but the trio assumed it to be just dog mischief. After the two left, Neven was convinced on Arwyn's worthiness, she asked Ayden if he thought so too. Ayden stated he would not get involved but agreed that Arwyn bared watching.

The two entities departed the forest, their conversation witnessed by the Carvers. The little people immediately came out of hiding and began to carve Arwyn's image into the Glade.

The Carvers are a shy race that dwell in The Glade or the Glade of Heroes, a forest which has a tree carving of a hero from each of the Five Lands. Whenever a new hero emerges in Quin, the Carvers immediately carve a tree in his or her likeness. Upon finishing they immediately retreat into hiding. Due to the sudden and miraculous appearances of these carvings, many assume that the Glade carves the images itself.

Retrieved from "https://aliens.fandom.com/wiki/Carver_of_the_Glade?oldid=172895"
Community content is available under CC-BY-SA unless otherwise noted.