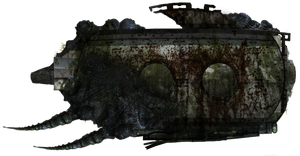 Barotrauma
The Carrier is a singular instance of a parasitic, sentient growth that has taken hold of a metallic submarine cargo vessel. Only one of these creatures has so far been encountered.

Retrieved from "https://aliens.fandom.com/wiki/Carrier_(Barotrauma)?oldid=165376"
Community content is available under CC-BY-SA unless otherwise noted.