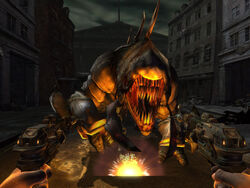 Hellgate: London Universe
If a rhinoceros were cross-bred with an elephant and a bull, it would be eaten alive by the Carnagor. This heavily-muscled monster has an incredibly thick hide, huge tusks, hundreds of razor-sharp teeth and jagged spines jutting up from its back. It is a ravenous creature, driven by an insatiable need for fresh meat.

The Carnagor is not subtle in its movements, charging and goring its prey whenever possible. It also gnashes and slashes with its tusks and teeth, making it extremely deadly to fight head on. The Carnagor is also a subterranean creature, its powerful hands capable of digging through bedrock. It uses this ability to both move unseen just below the surface of the streets of London, as well as to occasionally escape the rare adversary that can actually pose a threat.