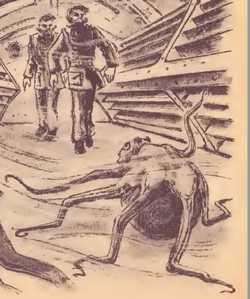 A Carellan conversing with two humans. Note that the text of the story indicates a much larger number of limbs.

Either rolling or walking, depending on the wind.

Largely clicks and whistles, can be learned by a capable human easily enough

An attempt to build a human outpost on their planet, attitude friendly on both sides

"A Wind is Rising"

The Carellans are a race resembling spiders or octopi, inhabiting the planet Carella I.

The Carellans resemble spiders or octopi, with a small central body and at least a dozen limbs. They are the natives of the planet Carella I; a world where the wind never falls below 70 mph (~ 112.5 km/h), and such a shape is optimal under the condition. They walk upwind by digging several of their tentacles in the ground while the others reach forth. Downwind, they roll like tumbleweed, wrapped in their tentacles.

The Carellans are oxygen breathers, although used to a lower content than humans. However, they cannot survive for long in still air, and conversations with humans are held in a room with walls which have gaps to bring the Corellan wind down to thirty-five mph, a middle ground tolerable for both races. They are used to very strong winds; a storm which an Earthman would call a (currently hypothetical) Category 6 hurricane is a moderate gale for them.

The Carellans are friendly, having peacefully allowed the humans on their planet and assisting them when possible. They even offered to let the humans come with them when leaving for the underground caves in which they hide during winter and its storms.

They live in tribes small enough to fit aboard several dozen of their land ships. It is known that an entire tribe gathers for celebrating the end of the summer before they must leave for the caves.

Carellans are a rather primitive race. They do, however, have a technological level sufficient to build land-sailing ships with complex rigging. Due to the conditions of the planet, the materials available to them are stronger than steel.

Retrieved from "https://aliens.fandom.com/wiki/Carellan?oldid=155948"
Community content is available under CC-BY-SA unless otherwise noted.