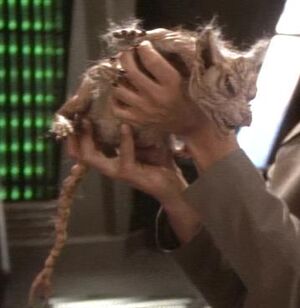 Cardassian Voles are small six-legged non-sapient rodentoids native to Cardassia Prime. An average Cardassian Vole is about 25 centimeters long, not including its tail. These voracious creatures have a very fast reproductive rate and are often regarded as pests. They are known to build more than one nest to live in, with one nest being the main one and the others being considered secondary nests.

Cardassian Voles are notable for having bony ridges on their faces similar to those of Cardassians, implying a common ancestry between the two species. This is an interesting fact because it suggests that Cardassians may have evolved from hexapod ancestors. Cardassian Voles are attracted by energy fields and the space station Deep Space 9 once suffered from an infestation of them.

Cardassian Vole fighting is an illegal sport similar to cockfight. Chief of Security Odo once caught Quark and Morn preparing Cardassian Voles to fight. The voles were confiscated, although Quark claimed that they were Morn's pets.

Retrieved from "https://aliens.fandom.com/wiki/Cardassian_Vole?oldid=124821"
Community content is available under CC-BY-SA unless otherwise noted.