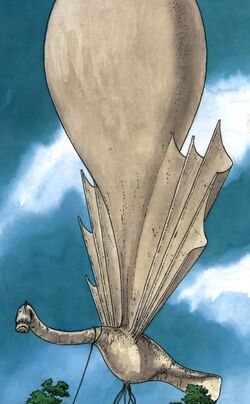 Caravelles are a non-sapient species of huge airborne life forms native to the planet Aldebaran-4.

Caravelles are immense, limbless reptilian-like herbivores and float freely in the atmosphere thanks to a bladder-like structure filled with helium, which the creature is somehow able to synthesize by consuming a particular type of algae. They also have sail-like mobile membranes which allow them to be easily propelled by the wind currents.

On their homeworld of Aldebaran-4, these creatures are naturally used as a source for harvesting helium, which is done in a way that does no permanent harm to the Caravelle.

Retrieved from "https://aliens.fandom.com/wiki/Caravelle?oldid=181638"
Community content is available under CC-BY-SA unless otherwise noted.