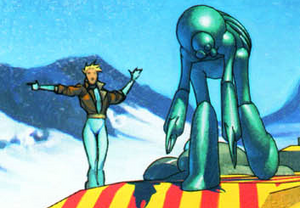 The Carapoid robots are a type of mechanical animate of unknown manufacture.

The construction of the carapoids is unknown. They mostly resemble bipedal insect drones. Parts were discovered in a ruined structure later determined to be Precursor origin,. the parts were from three separate carapoids, and though to be mere stone sculptures as no evidence of mechanical or dialectical function was observed. The composition was determined to be 95% silicate, with the remaining 5% containing trace elements too small to list individually. No means of electrical or mechanical operation was discovered through disassembly.

Since those few early discoveries, several facts have emerged about the carapoids. They are computing and archival machines of great power, apparently powered and operated bu photonic energy transmitted at the molecular level. They possess remarkable sensory functions. and are capable of auditory communication, with their native language being untranslatable at this time. All intact carapoids found posses no records of their history, nor that of the Precursor civilization of which they are theorized to be a part. Carbon dating puts their origins at approximately 120,00 years ago, the same dates as most Precursor artifacts and structure. The carapoids do retain some technical knowledge from their original programming, especially in the areas of biology, genetics, and medicine. They possess no means of self-repair, and thus intact units are highly prized by scientists and historians throughout the Chimeran Imperium.

The first recorded discovery of a carapoid was in 1031 IC (Imperial Calendar) on the third planet of the Guician system.

Hundreds more carapod pieces were found as that sector of space was more thoroughly surveyed and cataloged, all within or near other Precursor structures or ruins.

In 1319 IC, a fully functional animated carapoid was discovered on Killarian, buried intact in a Precursor site. The carapoid was brought to Tenebros, where it was examined and eventually disassembled for study. The carapoid could not be brought back to functionality upon reassembly.

The next carapoid discovered intact was brought to Tenebros in 1354 IC, where it was examined intact. Since then, over 100 intact carapoids have been uncovered on over 50 worlds in Precursor ruins.

Imperial law dictates that any carapoid discovered, intact or otherwise, must be immediately reported to the nearest Imperial government office, where a small reward is available, amount depending on the condition of the carapoid. Failure to comply will result in arrest or worse.

Carapoid robots now find themselves in the employ of Eternal Emperor Herus Chimeran, catering to his medical needs and extending his life. One Carapoid was discovered on Serevan, by a miner named Sara Jannings, who named it Rover.

Retrieved from "https://aliens.fandom.com/wiki/Carapoid_Robot?oldid=174993"
Community content is available under CC-BY-SA unless otherwise noted.