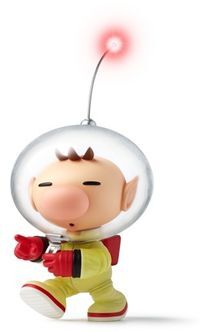 Controls Pikmin with his whistle

Nintendo
Captain Olimar is a Hocotatian from the planet Hocotate, and one of the famous explorers of PNF-404, and an employee of Hocotate Freight co. He is a very prominent character within the Pikmin franchise.

Olimar is an average size for a Hocotatian, only about 0.75 inches from his feet to the tip of his antenna. He has three tuffs of brown hair, and is commonly seen in a beige spacesuit with red outlines and gloves. A special whistle attachment is on his helmet, which he commonly uses during his expeditions onto PNF-404.

Olimar is a calm and collected individual, holding a big interest in biology according to the many reports he has made on PNF-404 life. It was him who made most of the discoveries on the planet, becoming famous for his many studies on numerous lifeforms on said planet.

He used to not have a selfish disposition when it came to finding treasures, but his later expeditions reveal a more fixated interest in these items.

Captain Olimar's first initial contact with PNF-404, according to his personal history, was more of an accident than an intentional one: during a vacation from Hocotate, his ship is struck by a notable asteroid which sends him off-course, and crash-landing onto the planet in question.

This crash landing left his ship, known as the Dolphin, losing numerous parts, to the point of disrepair that Olimar was stuck on said planet, unable to go back home. He also described in his notes that he only had a limited supply of air, and that the air on PNF-404 was filled with oxygen, making it highly poisonous for his species. This left him, at the time, with only 30 PNF-404 days.

In a stroke of luck, however, he stumbles across the native Pikmin species, more specifically the Onions that created them. The first species he discovered was the Red Pikmin species, who helped him retrieve one of the first parts for his ship.

Over the following weeks, Olimar made fair progress in collecting his ship parts. During these weeks he made numerous notes in the local lifeforms, including the discovery of several new species, including three new Pikmin species. Lucky for him, Olimar did manage to finish this task before his air supply could run out, and rebuilt the Dolphin to interstellar travel capability. He took back a special souvenir (a bottle cap) and took special final notes on the lifeforms he had met with on the way back.

Sometime after his first expedition, Captain Olimar was then tasked on a secondary expedition to the planet, this time an intentional task with his assistant Louie, to collect the treasures on said planet for the Hocotate Freight co. debt, which needed to be paid at the time. As this was an intentional trip, this time Olimar had a far larger supply of air, allowing his trip onto PNF-404 much longer than the previous trip. Although initially tasked with treasure collection, Olimar made studies and numerous more discoveries on numerous more species of creatures and discovered three more Pikmin species, and several new family groups.

They eventually paid off the debt, but smaller logs explain that Louie was accidentally behind, and he does attempt to go and try to retrieve him back, finding specialized species along the way.

A smaller, lesser known expedition to the planet had him return with Louie to PNF-404 to pay off another, secondary debt. However, upon landing, the ship was destroyed completely by the Quaggled Mireclops, leaving him and Louie completely stranded this time, and without a method to fix said ship. He and Louie go and explore the planet, and during this he is discovered by the Plasm Wraith.

According to the reports by Captain Charlie, Olimar is then captured by the Plasm Wraith and prevented from leaving due to his suit's "auto-sleep" feature the Wraith keeps activating every time Olimar attempts to leave. From his team's efforts, Olimar is freed and escaped.

Much like the very first visit, Olimar's trip here is more accidental: flying a new ship, the S.S. Dolphin II, through the cosmos ending a delivery for his company, when he is then struck down by an asteroid and landed on PNF-404 again. This one is notably special compared to his previous visits, according to his notes, mostly because instead of collecting treasures, he had to collect fuel resources called Sparklium.

This trip is more wide-spread, getting the aid of the species of Pikmin once again, until collecting the necessary ship parts and the right amount of fuel for the flight back home.

Throughout his many trips, Captain Olimar has made numerous discoveries on numerous organisms, each trip providing more and more information, along with new species:

Retrieved from "https://aliens.fandom.com/wiki/Captain_Olimar?oldid=150741"
Community content is available under CC-BY-SA unless otherwise noted.