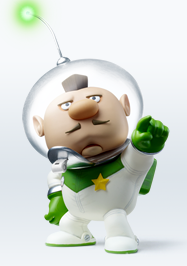 Pikmin
Captain Charlie is a Koppaite retired space ranger that appears as the main explorer and captain within Pikmin 3. He is the main captain with his crew, Alph and Brittany, that had found PNF-404 during a mission for his home planet.

Charlie stands about as tall as a quarter. He has tannish skin with brown hair, a small mustache under his nose, and his eyes are constantly open. His outfit is made up of a spacesuit with a green label and a small star on his person.

Being revered as a hero and one of Koppai's greatest legends, Charlie is a level-headed individual and a natural leader towards his crew. He shows a lot of care and protection towards those he cares about, and enjoys the company of his crew. He also seems to have a rather extensive knowledge about ducks: having a rubber ducky as a good luck charm, and his pet duck named Elizabeth he describes as his soulmate.

On PNF-404, he had developed a deep fascination with the native flora, stating it has moved him in a way that's difficult to describe in words.

Throughout much of his youth, Charlie was a respected Space Ranger who often traveled on his tasks alone on different tasks and missions for his home planet. Throughout this time, he has lead three other missions prior to the big mission revolving onto PNF-404. All three suspiciously revolve around his rubber ducky being stuck somewhere and/or missing.

Captain Charlie along with numerous others, was tasked with Brittany and Alph to search around the galaxy to find a notable food source for Koppai, as their food supply had reached drastically small levels. His crew manage to find PNF-404, though there's a strangely low bit of data on their entering of the planet, indicating a crash-landing.

Charlie upon landing on the planet, is discovered and "eaten" by a Phosbat, to be rescued by his crew later on. He continues his mission to collect the local edible foods to bring back to Koppai. During this, he and his crew discover Captain Olimar's distress signal, which they proceed to locate and find him and upon the end of their mission bring him back with them, along with the food supply.

While not as numerous as Captain Olimar before him, Captain Charlie did discover a fair amount of species on PNF-404 during his expedition there: