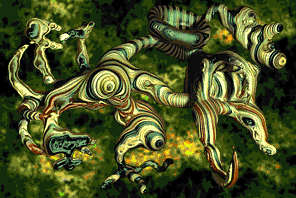 The Capelons are masses of flowing fibers who can rearrange their bodies quickly to assume any shape. They evolved on a highly predatory world where their camouflage and shape-shifting were useful for catching their scarce, elusive prey before competing predators could.

They eventually developed the power to repel competing predators and other threats as a telepathic extension to their camouflage ability. They make themselves so unnoticeable that the threatening being forgets what it was thinking about, allowing the Capelon to bring down its prey and make an escape.

The Capelons can combine their individual powers. A planetary population of Capelons can hide their entire planet from notice.

You are the Hunt Leader of the Capelons. Your people have been so successful on their own world that their numbers have swelled and prey grows scarce. You must lead the hunt to the stars and find new worlds for Capelons to roam.

As on the home world, so must it be elsewhere. There are surely races of hunters from other worlds, and they will threaten to leave the Capelons nothing if you are not quicker and more cunning.

Planet Camouflagers: The Capelons are self-preserving. You can make all your colonies invincible for one day.

Retrieved from "https://aliens.fandom.com/wiki/Capelon?oldid=160974"
Community content is available under CC-BY-SA unless otherwise noted.