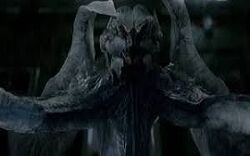 Mainly consisting of hissing and growls

Quick absorption of organic tissue of another lifeform.

Life
Calvin is the name given to a Martian life form believed to have wiped out all life on Mars, therefore making it an apex predator.

Each cell belonging to Calvin is a muscle, a nerve and an eye at the same time. It is semi-intelligent. Calvin is able to quickly adapt to its surroundings.

Calvin is presumed to be a species which lived on Mars and dominated the Martian soil. In a "hibernation" state the crew woke Calvin up, its first priority is clearly to grow, and the second to ravage the crew.

Calvin is first discovered as a sample of dormant organic tissue. When provided with simple nutrients and water it begins to grow into a multi-cellular form. In this state, it grasps Hugh's finger forcefully while being examined. Hugh is able to free himself from the creature's grasp, and soon after Calvin enters another dormant state. Hugh attempts to coax Calvin into awakening by administering a series of electric shocks. Calvin reanimates and attacks Hugh's hand, breaking it. Calvin then uses the broken glass rod of the electric prod to escape its enclosure. Calvin makes its way through the lab and enters a container where a lab rat is being kept. When the frightened animal bites Calvin, Calvin attacks it, consuming the rat and growing larger. Upon seeing this, Rory enters the lab and rescues Hugh, but this results in him becoming stuck in the lab with Calvin as David initiates containment protocols to prevent Calvin's escape. Rory unsuccessfully tries to kill Calvin with a flamethrower. Calvin enters his mouth and devours his insides before emerging even larger. The resulting fire causes the emergency vents to open and Calvin is able to escape into the station.

Calvin is next seen when it grabs onto Ekaterina, the captain, while she is in space trying to fix the communications system. Calvin causes her space suit to malfunction causing coolant to flow into her helmet, drowning her. She is however able to prevent David from opening the door, preventing Calvin from re-entering the ship. Despite this, Calvin makes his way into one of the thrusters and back into the ship.

Calvin then attaches itself to Hugh's leg (which he doesn't feel as a result of his paralysis) and feeds on him. The loss of blood kills Hugh and after the crew discover Calvin it proceeds to hunt them.

Another ship arrives as a secondary fail-safe measure and attempts to push the space station farther into space to prevent Calvin getting to Earth, however Sho mistakes the ship for a rescue ship and tries to board it. After a struggle with Calvin Sho prevents Calvin from getting to Miranda. Calvin kills the crew of the fail safe ship and Sho is dragged into outer space.

The last two survivors of the crew (David and Miranda) come up with a plan to lure Calvin into an escape pod so that David can launch himself and Calvin into outer space to prevent it from ever reaching Earth, while Miranda will go back to Earth by using a second escape pod. One pod flies into space, while the other reenters the atmosphere and lands in the waters off the coast of Vietnam. When some curious fishermen open the hatch of the pod they find out that Calvin and David are in the pod that landed on Earth and that soon after launch, Miranda's pod struck a bit of space debris, causing it to fly off-course and into space. The ultimate fate of life on Earth and Calvin are left unanswered.

Calvin before escaping.
Add a photo to this gallery

Retrieved from "https://aliens.fandom.com/wiki/Calvin?oldid=198269"
Community content is available under CC-BY-SA unless otherwise noted.