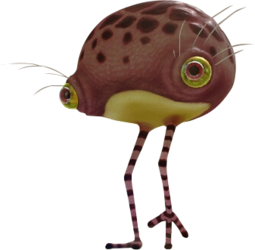 Pikmin
The Calcified Crushblat is an amphibious creature discovered during Captain Charlie's expedition in the tropical coastal regions on PNF-404.

This species of Crushblat is a strange creature, seemingly nothing but a large head with small, chicken-like legs. Its whole body is covered in smooth skin, which is often concealed in a calcified casing for protection. Its eyes are spread wide apart on its head, with small hairs above its eyes.

Its back patterns differ from each individual, with differently patterned stripes on its legs and cobbled spots on its back. This is the main (and currently only) way to point out one Calcified Crushblat from the other.

Calcified Crushblats are fairly passive creatures, and can move fairly fast to avoid predators. It is often studied during its slumber, but while it won't actively attack other creatures that doesn't mean it won't try to defend itself. If push into fighting, it is able to perform a similar defensive strategy to most Wollywogs; jumping in the air and crushing those underneath it.

Despite this, they are observed to absorb nutrients from the water of their territory, which itself is a long process, making them sedentary much of the time thanks to a low metabolism.

This specialized ability is what gave this creature its namesake, and is what it is most notable for doing. The calcification on its body takes the form of a translucent, almost crystalline shell.

They are sometimes observed chipping holes in this armor, namely at the mouth so they always have a hole to feed from, as the calcification covers every part of their body except their legs.

After some case studies in fossil records, Calcified Crushblats were once fully aquatic molluscan creatures. However, overtime, they evolved their sets of legs and a adaptable calcified shell that stores water to keep it from drying in the sun.