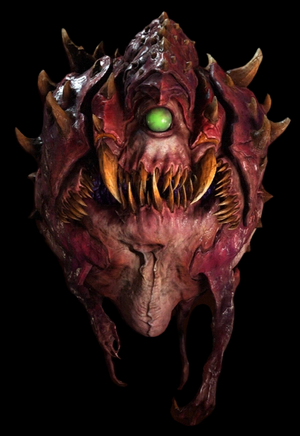 "They float in the air, belch ball-lightning, and boast one Hell of a big mouth. You're toast if you get too close to these monstrosities."
―DooM II: Hell on Earth instruction manual

The Cacodemons (also nicknamed "Pumpkins" and "big-mouthed floating thingies") are a species of demons that are generally spherical in nature and capable of firing out energetic orbs at opponents. They were first witnessed by the UAC during the first invasion of Mars and Phobos. Many varieties of Cacodemon are known to exist, including two known subspecies - the Malwrath and the Wretched.

A Cacodemon with arms
(Doom 64: Absolution)

A much faster if smaller and weaker variant
(Doom 3)

A Wretched
(Doom RPG)
Add a photo to this gallery
Retrieved from "https://aliens.fandom.com/wiki/Cacodemon?oldid=182671"
Community content is available under CC-BY-SA unless otherwise noted.