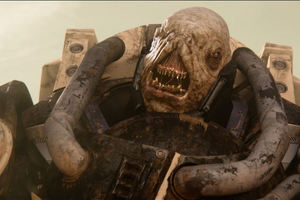 The Cabal are a highly militarized alien species which has taken control of the planet Mars. They are notorious for destroying entire planets simply to save time rather than piloting their ships around them.

Thousands of years ago the Cabal were originally jointly ruled by the Emperor and the military aristocracy known as the Praetorate. However when Emperor Calus came into power, he believed that the Praetorate was corrupt and abusing their powers, for they controlled citizenship to the Cabal Empire to the exiled Legions. In addition he was dissatisfied of how the Cabal were becoming a war-like race.

Seeking to reform the empire, Calus stripped the Praetorate of their powers and redistributed their wealth to the people and granted full citizenship to its wayward warriors. The disgraced Praetorate believing Calus's methods were weak, schemed to overthrow him.

The Consul a high ranking member of the Praetorate selected a Cabal runt name Ghaul training him to become their weapon of revenge. By the time Ghaul came of age he lead the Red Legion, the Cabal's greatest army. Calus planned to liberate the Psion race that his people enslaved millennia ago however his plans never came to be due to the coup launched by turncoats and Ghaul. Calus was exiled to wander the galaxy and the Cabal under the leadership of world and even systems were razed in the name of the empire, acts which Calus had seen was too costly and a betrayal to the Cabal way of life.

The Cabal made their way to the Sol System where they learned of the Guardians and the Traveler. Due to the Guardians powers of ressurection, the Cabal forces restrained themselves from a full scale invasion of Earth until a countermeasure could be developed. When Oryx came to the Sol System to avenge his son, the Cabal garrison was converted into Taken by the Hive god. Before the Cabal were destroyed an encoded message was sent back to the empire requesting help.

The message eventually reached the leadership of the Cabal, which led to the Red War, where Dominus Ghaul launched a surprise attack on the Last City, successfully capturing the Guardian's home and sealing the Traveler's Light. When Ghaul was defeated, Calus returned from his exile to reclaim his throne and offered the remnants of the Red Legion a place in his loyalist camp.

The Cabal are a highly militaristic society. The control a vast entire with legions that are sent across the galaxy to bring new worlds into compliance. Defeat in the eyes of the Cabal is unacceptable to their doctrine and would prefer to burn everything in their wake. Cabal legions are exiled from their world and the empire until their objectives are completed.

Retrieved from "https://aliens.fandom.com/wiki/Cabal?oldid=181933"
Community content is available under CC-BY-SA unless otherwise noted.