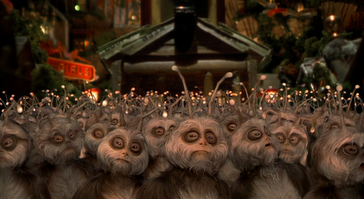 Men in Black
The C18 Locker Aliens are a sapient race of small (a few centimeters hight) humanoid alien creatures with brown fur, large eyes and bioluminescent antennae. They are so named because at least one colony of them is known to inhabit the locker C18, located in the Grand Central Station in New York City, on the planet Earth.

The keys to this locker belong to Men In Black Agent K. The aliens worship K as the "keeper of the light", and his seldom appearances over the decades may play an important part in the tiny aliens' religion. They are also known to worship objects left by K on the locker, such as a watch, which would later be retrieved by K and replaced with a better watch left there by Agent J, who, as a result, sees himself worshipped by the locker citizens as well. The aliens were later transferred to J's locker in the MIB headquarters. Members of this species, or at least the group living on Earth, seem to spend their whole lives in the locker, and may regard the outside world as a quasi-mythical realm. It is currently unclear when and how they ended up on Earth and whether there are others of this species in other parts of the universe.

Retrieved from "https://aliens.fandom.com/wiki/C18_Locker_Aliens?oldid=202736"
Community content is available under CC-BY-SA unless otherwise noted.