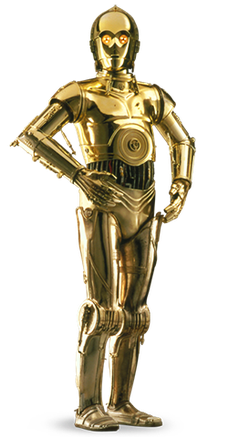 C-3PO is a protocol droid designed to assist in human-cyborg relations. His programming includes etiquette and the ability to translate several languages and codes used by other forms of technology. He is also known for being the close friend and companion of astromech droid R2-D2.

C-3PO and R2-D2 were originally among the many droids serving on Princess Leia's ship, the Tantine IV, transporting stolen plans of the Imperial Death Star intended to be delivered to Alderaan to the benefit of the Rebel Alliance. When the ship was captured by Imperial forces, Leia hid the plans within R2 along with a message for Obi-Wan Kenobi, who was living as a hermit on the nearby planet Tatooine. In order to deliver this message, R2 and 3PO fled from the ship in an escape pod. Once on Tatooine, they were both captured by Jawa merchants and sold to Owen Lars, who needed a translator droid such as 3PO to deal with the binary language used by his moisture vaporators.

Later on, 3PO accompanied Owen's step-nephew, Luke Skywalker, to retrieve R2 after the latter escaped to try to find Kenobi. After the old hermit saved them from Tusken Raiders and saw the Princess' message requesting his help, the two droids also accompanied Skywalker, Kenobi and hired pilots Han Solo and Chewbacca in what was originally intended as a trip to Alderaan to deliver the Death Star plans. Since Alderaan ended up being destroyed by the Death Star before that, they instead managed to evade Imperial ships which were pursuing them and found their way into the weaponized station itself, where they managed to rescue the Princess and return her to the Alliance.

Retrieved from "https://aliens.fandom.com/wiki/C-3PO?oldid=164306"
Community content is available under CC-BY-SA unless otherwise noted.