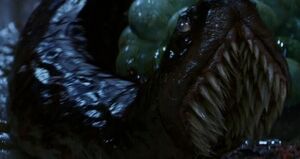 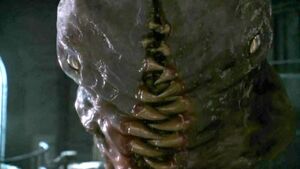 Dreamcatcher
The Ripley (also known in the novel as byrus) are a complex parasitoid alien macro virus.

The adult aliens resemble deformed serpent-like beings with legs, while the younger aliens, or byrum - nicknamed "shit-weasels" because they can be created in a host organism's stomach and escape by eating their host's body between the stomach and anus - are legless, smaller versions of the adult alien. Both the adult and young aliens have a mouth that consists of a slit on the underside of the head that goes down the length of the worm. The mouth lips separate to reveal hundreds of teeth that can bite through steel.

Both the adult and shit-weasel aliens are capable of immediate asexual reproduction using eggs. The eggs hatch into even smaller versions of the byrum that already have the carnivorous instinct of the adult aliens.

The adult aliens are capable of not only telepathy, but the ability to give those around them telepathic abilities. They can also manipulate the minds of those around them. They use this power to appear as "Gray Boys". "Gray Boys" look nearly identical to the stereotypical Grey alien look (it is mentioned that the Ripley have been plaguing Earth since 1947, the year of the Roswell crash), but with pus-like skin. Gray Boys may spontaneously explode in a cloud of red dust for two reasons: if near death, or as one final attempt to spread the infection.

The virus is able to rapidly manifest itself and infects any living host on contact. While most people who are only externally exposed will survive (despite a claim by Abraham Kurtz that they will all die from it, or that it cannot be predicted), any ingestion of the viral mold will almost certainly lead to the formation of a byrum, and eventually death.

The byrum are stronger than humans, both in the ability to withstand pain and in physical strength. However, they die from almost anything that would kill a human. They are especially frail in the cold, thus it can be assumed that they originate from a warmer planet.

The aliens are covered with a mucous-like substance to withstand their hosts' stomach conditions. The mucous quickly becomes viral on surfaces.

An adult alien appears behind Jonesy as a Gray Boy and promptly explodes to infect him. However, because of his special telepathic powers (given to him by Duddits), Jonesy is instead taken over by this particular Ripley, named Mr. Gray, so it can escape in his body and embark on a mission to infect the rest of the world.