"As I understand it, over time they have become so interconnected with the master computer on their planet that their language, their thought patterns have become as close to binary as it's possible for organic beings."
―Captain Jean-Luc Picard, "11001001" 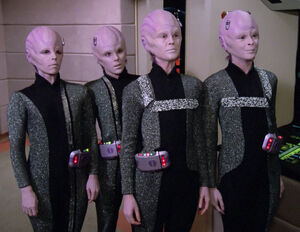 Shorter than most Humans

The Bynars are a sapient, spacefaring humanoid species from the planet Bynaus, in the Beta Magellan star system. They always operate in pairs and possess cybernetic brain implants which provide links between their minds and a central computer located in their home system.

Bynars are humanoids with lavender skin and enlarged craniums. They are shorter than the average Human, and have been described as neither male nor female.

They always operate in pairs, and have become biologically dependent on their master computer, with which they are connected via the cybernetic implants on their heads. The computer controls all technology on Bynaus and is essential for the Bynars, who will die if disconnected from it.

When communicating with Humans and other non-cybernetic races, Bynar pairs alternate their speech and finish each other's sentences. While speaking among themselves they use a different, much faster language which doesn't appear to be translatable by 24th century Federation UT devices. This is referred to as their primary language.

Bynars depend on their technological implants to process information at such accelerated rates as they have become accostumed to. They carry a device with them which is used to store the additional data until it's needed.

Bynars are renowned for their technical skills, and have been employed by the Federation as computer technicians and programmers. According to Commander Quinteros, the Bynars are extremely fast and efficient at their jobs.

Appropriately, Bynars view the world in terms of binary-like possibilities, anticipating that each action may have either a positive or a negative response. For instance, when they needed the USS Enterprise-D to back up the data for their central computer (and prevent the extinction of their species, as the computer would have to be temporarily shut down to prevent damage from a nearby supernova), the Bynars anticipated that asking the ship's captain for help could lead to two possible results: either he would agree or not. Since it was a life or death situation and they couldn't risk the chance that he might say no, the Bynars decided to hijack the ship instead, as that would ensure their survival. While this can be interpreted as a hostile action, it should be noted that, after the crisis was avoided, the Bynars responsible for the theft explained their decision and declared that they would take whatever punishment the Federation felt appropriate for their crime.

Retrieved from "https://aliens.fandom.com/wiki/Bynar?oldid=171881"
Community content is available under CC-BY-SA unless otherwise noted.