Variable, from a few meters to a kilometer

The Bydo were originally bio-engineered as weapons sometime during the 26th century. They were placed in an orbital facility the size of a small moon where a combination of natural evolution, genetic tampering, and "black magic" (more than likely psionics, although, given the virulency of Bydo organisms, they may very well be part Demon) changed them into virulent germ-warfare agents.

The facility was intended to be driven into a wormhole to reach an enemy planet in the galaxy, but something went wrong before the trip and the Bydo became active in our own solar system. The Bydo caused havoc and chaos, raging over the void for 150 hours.

The Bydo organisms were eventually rounded up and blasted outside our dimension by an experimental weapon. After an endless amount of time drifting, growing, and evolving, they eventually learnt about dimensional and time traveling and managed to escape their exile, coming back in time four centuries before they were actually created to make war on their creators on the 22nd century, as all Frankensteins' Monsters seem to do. Although most low class Bydo seem to be mere savage beast, the Bydo as whole race are sentient. They produce many forms of mechanical weapons during long conflict against humanity. Bydo mechanical weapons utilise neural transmission catalyst named J-zyme, this jelly-like pinkish tissue allow the Bydo to manipulate complex mechanics with simple will.

The Bydo were created in such a state that they behave both like energy-based waveforms and particle-based matter.

The Bydo were presumably wiped out from the known universe in their last war against the humans (Operation Last Dance). The true Bydo Core, the true source of the Bydo organisms, was destroyed by an anonymous pilot in control of the R-99 Last Dancer fighter.

Forces are "tame" Bydo organisms that can attach to synthetic vessels to add their energy to the vehicles. They are used by both R-Type pilots and organic Bydo starfighter craft. Forces are larval Bydo creatures encased in an indestructible force field generated by bio-energy, and controlled through rods. A artificial, man-made force called the "Bit" device is the result of attempting to reverse-engineer them using human technology to generate the field-a highly controversial project that never got much farther than prototypical stages. Likewise there were some attempts to further employ Bydo biology in human craft. Such examples are the Amphibian series, which are mostly composed entirely of Ribbon composites, as well as fighters created during extensive experimentation with J-Zyme. These all belong to the B-Series. However, due to costs, risks and the final success of Operation Last Dance, they never saw widespread use. Though they were prominent enough for at least one J-Zyme training academy to have been formed.

The Bydo are extraordinarily versatile creatures, capable of generating massive quantities of energy for the purposes of growth, reproduction, and self-defense. However, the true terror of the Bydo is their ability to assimilate any form of matter or energy, converting it into more Bydo. Given the fact that Bydo exist as both solid matter and as a waveform, and are fully capable of assimilating things in either state, and only need a moment to do so, it is fairly safe to say that the Bydo might just be THE single most dangerous and powerful biological entity in the known universe.

Also, they can consume THOUGHT. That's not an exaggeration, that is something that Bydo can actually DO.

For all this, however, some Bydo hosts can resist them, using the Bydo's horrific biological technology against them.

The Ayden, Shutom, Guaneem, Chimass in the F-A stage of R-Type Final are all part Bydo, although they are more human than Bydo. Flocks of these creatures are called Genon. 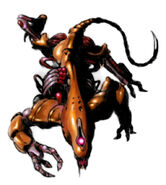 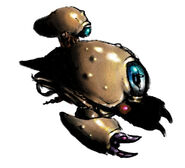 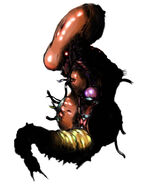 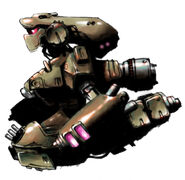 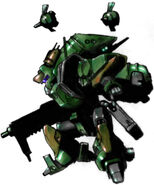 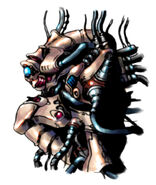 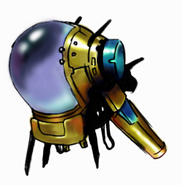