"There flapped rhythmically a horde of tame, trained, hybrid winged things... not altogether crows, nor moles, nor buzzards, nor ants, nor decomposed human beings, but something I cannot and must not recall."
―H.P. Lovecraft, The Festival 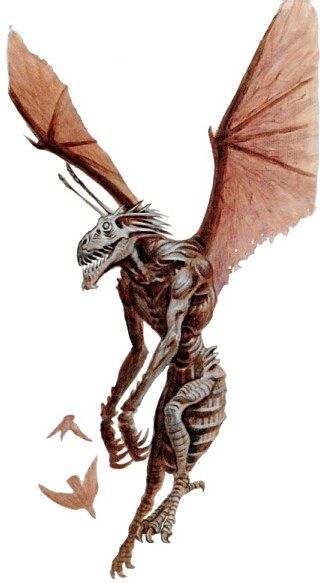 Byakhee are interstellar predators that travel the vacuum of space by means of an organ called a "hune". This organ, located in the thorax of the creature, allows the creature to greatly surpass the speed of light by unknown means. The creature can also survive the interstellar vacuum unaided. If one had the means by which to survive the myriad threats space presents, than one could ride a Byakhee to anywhere in the cosmos. When travelling beyond the speed of light, the creature's metabolism is greatly increased. When descending to the surface of any given planet, it is usually to feed; it is best avoided.

While on the Earth's surface, Byakhee can fly at speeds up to 70 kph. The "hune" also allows them to hover on a planet's surface, using their wings for movement.

It has been theorized that the Byakhee's "hune" is paramagnetic in nature; that is in fact attuned to the galactic magnetic field, and is propelled by the flux. If this is true, then it may explain the creature's uncanny ability to hover while planetside, as it could easily manipulate the Earth's natural magnetic field to achieve such an effect.