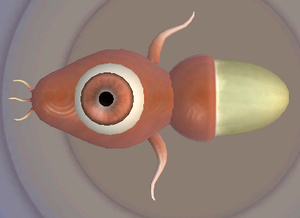 The Buzzy is a microscopic herbivore that can be encountered within the SPORE Universe.

The Buzzy is the ancestor to the slightly more advanced Needle Buzzy. Being a herbivorous creature, it doesn't pose much threat towards other creatures unless it is being hunted. The Buzzy gets its name from its ability to produce an electrical shock at enemies as a self-defense mechanism. It is the earliest forms of life to be shown to do this.

Retrieved from "https://aliens.fandom.com/wiki/Buzzy?oldid=180657"
Community content is available under CC-BY-SA unless otherwise noted.