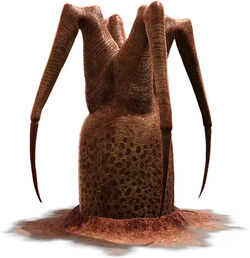 Butchertrees are sessile organisms indigenous to Darwin IV. While many species prey on the numerous and fast breeding Prismalope, Butchertrees are the only species to actually lure the Prismalope instead of giving chase although they also feed on the great Skewers as well. Dotting the plains of the planet's northern hemisphere, it will kill anything that comes within its attack range with its four branch-daggers.

They possess a bizarre symbiotic relationship with a currently-unnamed aerial organism, which happens to be the primary food source of the Prismalopes. On the Butchertree's side, it grows subterranean roots that resemble these fliers, allowing the "tree" to lure Prismalopes close enough to kill them. It is unknown exactly what the small fliers get out of this symbiosis, but it is likely that they receive relatively increased safety. If they were to flock near a Butchertree, they'd be less likely to be successfully preyed upon since the Prismalope might instead go for what are actually roots.

This species' reproductive processes is unknown. One possibility is that the small flier it associates with transfers eggs and sperm between individuals in a similar manner to how a bee would pollinate flowers. Another possibility is that the flier itself is the second gender of the species, an extreme form of sexual dimorphism. Either way, young Butchertrees are found close to their "parent" and are connected to them through an umbilical cord similar to that of the "growths" that mimic the fliers. The cord disappears once the young are capable of nourishing themselves.