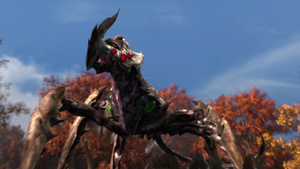 Tales of Arcadia
Buster is a large spider-like alien of an unknown species who was originally imprisoned for over 30 years in Area 49-B sometime after arriving on Earth. During the time, he befriended a Durian prisoner named Stuart, who managed to escape, but left and never came back for Buster, which made him develop quite a bitterness for the Durian.
Retrieved from "https://aliens.fandom.com/wiki/Buster_(Tales_of_Arcadia)?oldid=181164"
Community content is available under CC-BY-SA unless otherwise noted.