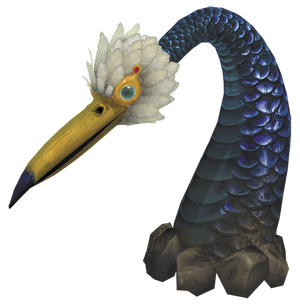 The Burrowing Snagret is a notable species of Snavian, and one of the first known snavian to be discovered by Captain Olimar on PNF-404. It is also referred to as a "Snake Crow", although it doesn't have any black feathers.

Burrowing Snagrets, much like other Snavians, seemingly appear as a hybrid between a bird and a snake. Its head is covered in white feathers with pinkish skin underneath. Its beak is long and narrow, ending in a blue tip. The feathers on the rest of its body resemble blue-tinted scales, with only its stomach possessing true scales in a evened-out pattern like true snakes.

Burrowing Snagrets are ambush predators, and spend most of their lives buried underground. When hunting, they will stay close to the surface and sense vibrations of suitable prey. Once they are close enough, they come out of the ground and pluck them with their long beaks, dragging them down into their burrows to eat.

This kind of hunting technique is mirrored in the Emperor Bulblax, but the Burrowing Snagret is better adapted for the technique.

Retrieved from "https://aliens.fandom.com/wiki/Burrowing_Snagret?oldid=149264"
Community content is available under CC-BY-SA unless otherwise noted.