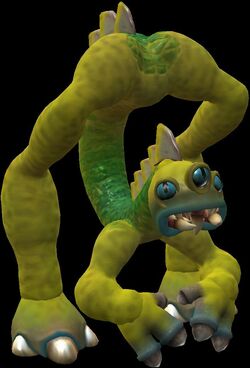 SPORE
Bunzo were a strange, trioptic species of unknown intelligence whose body curls around itself in a unique way. It is closely related to the Orlops, indicating that it must have originated on the planet Cattor as well, where they were certainly found to exist when discovered by the Screebles. However, since Cattor and, indeed, the entire Galvopa System has apparently turned up missing, it is considered extinct.
Community content is available under CC-BY-SA unless otherwise noted.
Advertisement