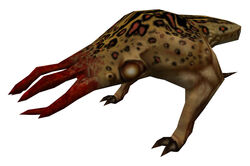 Half-Life
Bullsquids are a species of bipedal, highly aggressive carnivores indigenous to Xen, although they immigrated to Earth due to a dimensional rift accidentally created with the aid of Gordon Freeman. They are a hardy species, and are able to survive, if not thrive, within environs that are unfriendly or even toxic to humans, which includes but certainly is not limited to sewers and pools of radioactive, chemical, or biological waste. In their natural environments on Xen, they drink from the pools of unknown liquid that have healing or regenerative effects upon both humans and Vortigaunts.

Being a Xenian has no effect on the fact that they are still predators, and they have evolved a body similar to a small theropod. They move about on two short but muscular legs and are balanced on their posterior end by a thick tapered tail, and on their anterior end by a set of tentacles. Their head and thorax join abruptly to one another, and no neck or other visible separation appears to exist. Their eyes are black and glossy, possessing slit pupils, and are mounted on either side of the head; a strange trait for a predator, which generally would have their eyes facing forwards. The tail has a hooked claw at the tip, and is used to inflict large amounts of physical harm with an awkward spin attack. Their head-tentacles are perhaps their most striking feature, however. They are a collection of bright red protrusions ending in a set of teeth, surrounding the mouth and made to allow the ability to grasp prey.

They appear to be amphibious, with slimy skin that utilizes a beautiful coloration pattern roughly comparable to spotted cats with their skin being sandy brown, with the dorsal surface covered in dark spots. Their aggressive tendencies are also confusing, as they only appear to be aggressive on Earth, and have been noted on Xen for refusing to fight back even when attacked. Despite this, they are tremendously territorial at least on Earth, and their dispositions cause them to often attack other creatures in the area, including other Bullsquids, but especially Headcrabs, which may be their natural prey or a foe of another style. They will viciously attack Headcrabs until all of the small creatures in the Bullsquid's sight have been eliminated.

They will charge opponents with surprising speed and force; this, combined with their head-tentacles and tail have both contributed to their portmanteau name.