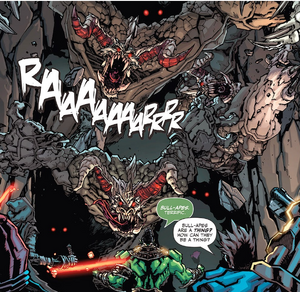 Jinnrise Universe
The Bull-Apes are a race of horned primates native to Earth.

The Bull-Apes are massive creatures towering over a Jinn. They have rocky skin which gives them camouflage in their subterranean home. They possess a set of horns that spring from their heads.

Very little is known about the Bull-Apes, even the Jinn regarded them as myths. They were the inspiration to the Minotaur in Greek mythology.

Retrieved from "https://aliens.fandom.com/wiki/Bull-Ape?oldid=172886"
Community content is available under CC-BY-SA unless otherwise noted.