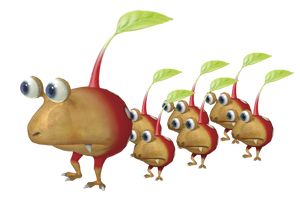 The Bulbmin is a parasitic species of Pikmin that has taken control of a Bulborb host. This is discovered during Captain Olimar's subterranean expeditions on PNF-404, seemingly a strictly subterranean Pikmin type.

Bulbmin don't have Onions unlike most other Pikmin, but unlike Purple Pikmin and White Pikmin, which have Candypop Buds for reproduction, Bulbmin strictly live their whole lives inside their host which is typically the Bulborb. It takes control of the host by connecting to the animal's nervous system, and using hormonal excretions.

This has a drastic effect on the Bulborb in question: the stems and leaves sprout from the creature's back, and the natural size is deceased to almost half the size of their unaffected counterparts. Bulbmin "young" also follow the adult and mimic its movement as Pikmin do until the Bulborb host has matured.

The host body does provide a distinct advantage in being protected from outside hazards such as water.

Retrieved from "https://aliens.fandom.com/wiki/Bulbmin?oldid=164776"
Community content is available under CC-BY-SA unless otherwise noted.