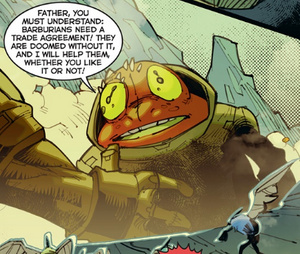 Bugutu is the son of Mbutu, the blasphemous god of evil. He seems to possess an antagonist relationship with his sire as the Barburian legends notes he is constantly in conflict. While its never stated he is an evil god like his father, the Barburians shun him. The Client, alien businessman that attempted to create a trade agreement with the Barburians was turned away due to his resemblance to the deity.

When words failed the Client under the ruse of a illicit monetary bribe instead tried to deliver a baby black hole to destroy their planet, allowing the Calvonell System open for trade. However Alena Kuznetsova, the smuggler delivering the package learned of his deception and ejected the doomsday package. In order to save face from failing to deliver the bribe, Alena conducted a vast display of illusion, portraying Bugutu defying his father in defense of the Barburian people. The Barburian interpreted this to be a message from the gods and accepted the trade agreement with the Client, though they decided to keep the divine revelation to themselves lest they anger the gods.

Retrieved from "https://aliens.fandom.com/wiki/Bugutu?oldid=175435"
Community content is available under CC-BY-SA unless otherwise noted.