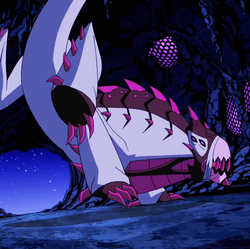 Buglizards are a non-sapient extraterrestrial species from the planet Lepidopterra, and the natural predator of Lepidopterrans.

Buglizards have a black head with a white patch on either side. Located on these, they have four red eyes, two on one side and two on the other. They also have sharp teeth, a row of red spikes running down their back, four legs with three red claws, and a white tail with a red tip.

Buglizards have enhanced strength, reflexes, and agility suited to keep up with Lepidopterrans. They also have prehensile tails that are used to capture their prey.

Buglizards can generate a blinding yellow fog capable of neutralizing a Lepidopterran's goo.

Buglizards have enhanced strength, allowing them to throw an Orishan with ease.

Buglizards possess an enhanced sense of smell, being able to track Humans from across long distances.

Buglizards have claws that are strong enough to cling to the bottom of a space ship.

Buglizards can be harmed by electricity, such as that generated by a Gimlinopithecus.

A Buglizard's fog is ineffective against a species immune to most other gases, such as Orishan.

Buglizard
Add a photo to this gallery
Retrieved from "https://aliens.fandom.com/wiki/Buglizard?oldid=184785"
Community content is available under CC-BY-SA unless otherwise noted.