Alien Species
Register
Don't have an account?
Sign In
Advertisement
in: Futurama Universe, Herbivores, Creatures of Unknown Origin,
and 8 more 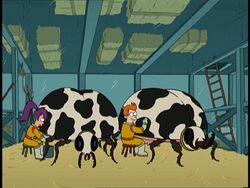 Futurama
Buggalo are giant beetles or beetle-like extraterrestrials with cowskin-colored shells that can be used for meat or milked like present-day cows, which had gone extinct by the 31st Century. Their meat is consumed by sapient races, used as a tasty grilled meat and served in such places as Fishy Joe's. Known preferable condiments to use with buggalo meat is either BBQ sauce or Pepto-Bismol. Their shells could also be used as makeshift rowboats. The species was popular enough to have a place, Buggalo Bill's, named after them.

Leo and Inez Wong farm Buggalo at their ranch on Mars, which is one reason why they are extremely rich. Moreover, there are other Buggalo farms on Luna, with one specifically being owned by a known hydroponic farmer.

The origin of Buggalo is not clear, but it seems that they are from Mars, and Native Martians have domesticated them, using Buggalo as mounts. The Martians state clearly that someone who is one with the Buggalo may fly them, and so far there has only been one non-Martian to be able to fly them: Kif.