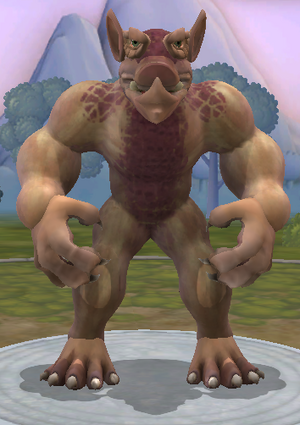 The Bugah are a humanoid herbivore that can be encountered within the SPORE Universe. They're also close cousins to the northern Bugaboo.

Bugahs have many similar physical features to their cousins the Bugaboo, but there are some notable differences. The jaws in the Bugah are more developed to eat tougher plants, with a sharpened growth at the front of the bottom jaw to be used in charging into rivals.

Living in more rugged conditions made the Bugah have less fur and more toughened skin, yet their claws aren't as developed as the Bugaboo.

Bugahs are sociable creatures, but more aggressive than their northern cousins. They travel the plains in packs.

Retrieved from "https://aliens.fandom.com/wiki/Bugah?oldid=169457"
Community content is available under CC-BY-SA unless otherwise noted.