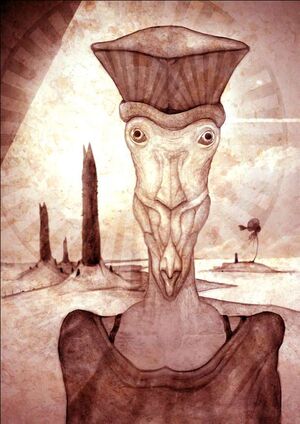 Made into the Subjects by the Gravital

The Bug Facers were a posthuman species that evolved from the Insectophagi. Over the course of their evolution, the Insectophagi's leathery face plates ossified and became a part of their jaws. This, in combination with the reduced digits on their hands, that became pincer-like, lead to them superficially resembling their insectile prey.

Due to a atavistic throwback, some of the Star People's genes resurfaced and resulted in the evolution of an Insectophagus-species with a slightly bigger brain, which allowed them to develop crude stone tools to better open insect colonies.

One thing led to another and they evolved into the civilization known as Bug Facers, which, like most sapient species, passed through consecutive cycles as agrarian (in their case hive-farming) empires, colonial endeavors, industrialization, massive world wars and finally, globalized world-states.

But in their history, they, like the Star People before them, faced an alien invasion. Not much is known about the invaders, and after many orbital and terrestrial wars the Bug Facers managed to fend them off, but they introduced many lifeforms native to their homeworld to the Bug Facers' world and induced them with a strong inter-species xenophobia.

This xenophobia led to them listening to the communications of their fellow posthumans for forty million years before finally joining the Second Galactic Empire.

Though they were prepared to face an alien invasion, the Empire didn't think about an invasion from other posthumans, and so the Bug Facers were the first species to be attacked by the Gravital, but also the only one that survived the onslaught. Through genetic engineering, they were made into the Subjects.

Retrieved from "https://aliens.fandom.com/wiki/Bug_Facer?oldid=162951"
Community content is available under CC-BY-SA unless otherwise noted.