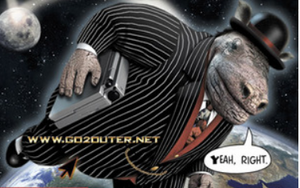 Outernet
The Bugs are an alien species that originally were native to the star system of Menkar.

To the galaxy at large, the Bugs to be a product of genetic experiment that crossed an Anatean rhinoceros with a Laladian hyena. Bugs looked very much like rhinoceros in a suit. They had tough-looking gray skin, an elongated muzzle, minus the horn, flexible ears that swiveled and twitched constantly, and small malicious, piggy eyes. They had stubby three-fingered hands that can crush rock. They are said to be impervious to pain.

During the Tyrant's rise to power, the maniacal human overlord sought worlds for conquest. He discovered that the star Menkar was home to a species ripe for taking. The race resisted his invasion, and in response the mad human despot had the planet vaporized, killing the world and every member of the species. One individual alone was spared and was captured. He was reformatted to be an even more brutal form of mental re-engineering until he created a race of clones known to the galaxy as the Bugs.

Since their recreation, they have been told that they were an artificial species created in a genetic engineering project. Therefore they believed that they owed their existence to the Tyrant and were bound to serve him. The Bugs served as the FOEs main muscle. However after repeated failures by the Bugs to retrieve the last Server from Earth, the Tyrant having enough killed Bug leaders and then discarded the rest, exiling them to the planet Nerdoofo in the Wolf Sector. Lost and without purpose the Bug attempted to make their own small but crudely depressed society.

However when the holder of the Server Jack Armstrong came to them he informed them of the horrible truth of their origins the Bugs swore vengeance and took arms against the human dictator. Gathering together behind a new Big Bug the clones launched an attack on the Dark Pyramid to avenge their people and rescue Jack's parents. The Tyrant eventually met his end when the Big Bug sacrificed its life to drag the Tyrant through a dimensional portal ending the threat to the galaxy.

Bugs are the hired muscle of the Tyrant and the FOEs. They are strong, cunning, and vicious with atrocious eating habits. Loyal to the Tyrant the serve as his shock troops, being led by an individual known as the Big Bug.

Bugs are notoriously known to be aggressive when insulted and would use violence to make their point. They live in barracks that all look the same. There isn't any word in the Bug language for architecture, and interior designer is what one would call someone who spills a drink in your lap. After being retired by the Tyrant the Bugs became more humble and mellow, trying to find meaning. They attempted to take hobbies to fill the void.

Retrieved from "https://aliens.fandom.com/wiki/Bug_(Outernet)?oldid=161727"
Community content is available under CC-BY-SA unless otherwise noted.