"Bugs thrive on carnage, tiger. They consume, infest, live off the dead and destroy other species."
―Agent K describing Bugs to Agent J. 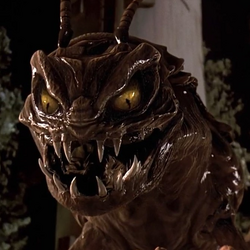 Lowell Cunningham
Bugs, a.k.a. Proximans, are a violent, space-faring insectoid race which feeds off the dead and thrives in war and destruction.

These creatures, despite their size, can easily squeeze into a suit that is no smaller than a Human. Most Bugs are similar in appearance to an oversized Earth cockroach, though they also show somewhat draconian or reptilian traits, particularly their eyes and mouths. Like Earth bugs, these creatures are fond of sugar. It's been suggested that they might operate in a hive-mind.

The Bug species is divided into different phenotypical castes, which resemble different kinds of insects. The cockroaches, like the Bug that assumed the name "Edgar", are the most common. Other varieties include mosquito-like and beetle-like forms. Some Bugs have wings and are able to fly under Earth's gravity.

Bugs are led by a Queen, which lays hundreds of eggs. These require a warm environment to develop. Some Bugs are born in an advanced stage of development while others have to undergo a subterranean larval stage. Curiously, the Bugs' larval stage is even larger than their adult stage. Their larvae are huge, maggot-like subterranean predators.

Their society is hive-based and they seek leadership from the Bug Queen. Their personalities have a common trait that they tend to get angered easily and take things too literally. When someone asks a Bug to drop someone, the Bugs will often get the impression that they should drop them in their mouths. This species is currently in war against the Arquillians.

The Bug Queen is the supreme ruler of her race and sends her children in quests for galactic conquest. As the Queen is always having children, the Bugs' population has increased to the point that they will provoke interstellar wars just for the opportunity to feed on the resulting casualties. The Bug Queen can produce a Royal Jelly that Bugs consider a favorite treat. Like money, the Queen will offer the Royal Jelly as payment to Bugs who perform certain tasks, such as eliminating a certain pest that destroyed a fellow Bug close to her.

Bugs have also been described as having a "massive inferiority complex", and are gravely offended by other species demeaning, mistreating and killing any insectoid life forms, even non-sapient ones.

Bugs, as seen in the original The Men in Black comic 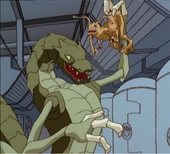 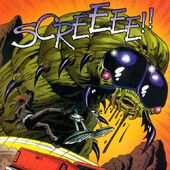