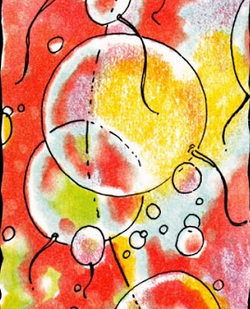 Dalgoda
The bubbles was a tentative name for a species from a planet that lay in the opposite direction of Earth a hundred light years away.

The bubbles' planet was devoid of intelligent civilization. But somehow the entire population lived on in the form of infinitesimal bubbles of magnetic energy, impulses in the circuitry of an enormous, global computer.

In 2062 shortly after the Canidan's ambassador to Earth had been murdered by a pedestrian, scoutships patrolling Canida were destroyed by an unknown hostile spacecraft. The Canidans were luckily able to destroy the vessel however the level of technology utilized by the ship disturbed them. In face of a new hostile threat to both their worlds, Canida reopened diplomatic relations with Earth. Over the next hundred years the Canidans began to investigate the origins of the new spacefaring civilization. Using giant space stations built specifically to search for alien life the Canidans made first contact with the bubbles. From them the Canidans learned about the Nimp, a war-like race that only sought planetary domination. The Canidans communication with the bubbles ended abruptly after they sent them data. And a year later the Canidans detected a formation of spacecraft that were undoubtedly the Nimp. The war between the Canidans and the Nimp soon began, but the former never heard from the bubbles again.

Their only surviving function in life--to gather and disseminate information. It was from the bubbles that the Canidans received the knowledge of subspace travel which was a concept that the bubbles had no use for.