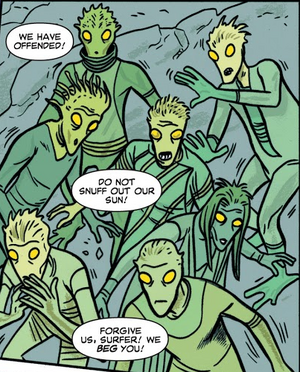 The Brundlebuds are an extremely small species, more than specks of dust. However they can move at incredible high speeds, even faster than Silver Surfer's cosmic senses can detect.

The Silver Surfer came upon the Brundlebud's planet, where he found that their micro sun was dying. He used his powers to re-ignite the sun. The inhabitants of Brundlebud 3 praised him, hailing him a god, building numerous monuments in his likeness. The Surfer was dismayed at their worship and tried to convince them other wise, only to terrify them to which the Surder decided to depart.

Retrieved from "https://aliens.fandom.com/wiki/Brundlebud?oldid=180326"
Community content is available under CC-BY-SA unless otherwise noted.