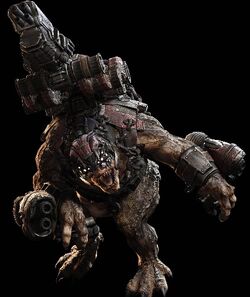 Gears of War
Brumaks are a species of huge creatures with extremely thick hides which are bred by the Locust Horde from smaller hominoid indigenous to their homeworld of Sera. It is likely that they were mutated by Imulsion in a similar manner to how the Lambent Wretches were created from the typical Wretch species.

Their species are extremely well-armed, and are deadly at both close range and distance. They are capable of carrying Locust Drones in combat as a transportation device. Even with their powerful weapons, they are certainly not above using their fists to crush opponents.

Brumaks are armed with several wrist guns as well as a large cannon mounted upon their back. These wrist guns fire a strange, orange projectile which explodes in a similar to a tank shell. Their large cannons are rumored to be sometimes replaced with energy cannons, which are likely powered by imulsion. If these energy cannon toting Brumaks exist, they may be cavern excavators while those with the more popular chain gun turret cannons are soldiers.