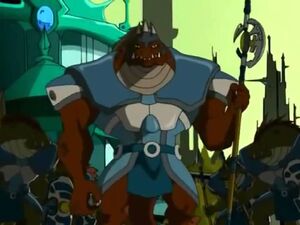 The Brotherhood are a race of bipedal lizards who travel the multiverse to conquer and devour other races,.

The Brotherhood invaded the Zodat's dimension, after they tricked the inhabitants in peaceful coexistence and began ravaging the great civilization.

The Zodacs disabled their transdimensional device to save other dimensions and trap the Brotherhood within theirs. Soon, Augustus O'Neil came to their dimension and helped the Brotherhood repair the transporter, believing that they intend to share their technology with Earth; but the in actuality really planned to feast upon humanity.

Later, when his niece and Donatello came to find Augie, Donatello overheard the lizards talking about their plans to eat Earth. When he related it to the others, the lizards decided to drop the niceties and force Augie to finish.

After a chase through the city bringing them to the Forbidden Zone, where they discovered the fate of the original inhabitants of the current dimension, the Brotherhood recaptured him and forced him to continue his work. After the two went to find Augie, they devised a plan in which they escaped to the insect world where they loop to Earth, but not before setting up magnetic charges that destroyed the transporter. When the Brotherhood activated the transporter to follow them they were attacked by the bugs and had no place to flee.

Retrieved from "https://aliens.fandom.com/wiki/Brotherhood?oldid=166708"
Community content is available under CC-BY-SA unless otherwise noted.