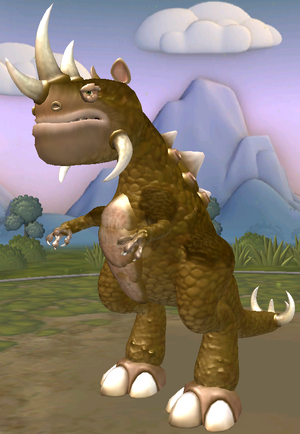 Maxis
The Brontoth is a large saurian-like creature within the SPORE Universe. It wasn't found within the game upon release, thought to be an extinct species, but was re-discovered upon the Galactic Adventures Expansion pack.

Brontoths also show signs of sexual dimorphism. The males of the species are darker in coloration whereas females are lighter colored, and possess less spikes than the males. Juveniles Brontoths also differentiate from the adults, as they aren't able to stand upright.

Retrieved from "https://aliens.fandom.com/wiki/Brontoth?oldid=169455"
Community content is available under CC-BY-SA unless otherwise noted.