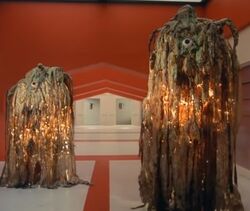 Space: 1999
The "Bringers of Wonder" are an unnamed species of sapient creatures whose lack of physical strength or speed is compensated by extraordinary psychic abilities which allow them to cast illusions and mental tricks to deceive others.

Humanoids who lay their eyes upon the real appearance of these aliens describe them as exceedingly grotesque, hideous, or monstrous. They appear as green amorphous creatures which seem to be made out of algal filaments, and have no facial features other than a singular lidless eye with pulsating veins. They also emanate a golden luminescence from their bodies, and communicate by telepathy.

Physically, these aliens are weak and slow-moving, and rely mostly on their psychic abilities to survive. They can read the minds of other species and project illusory images of themselves, to take the appearance of people that the subject knows and trusts. Since the illusions are taken from the subject's own memories, they cannot appear as strangers. Their mind control also extends to preventing the subject from noticing certain inconsistencies. Additionally, the aliens can hypnotize subjects to perform certain tasks; even if they can't directly control the subject's actions.

The Bringers of Wonder feed directly upon energy; particularly radioactivity. They can sustain themselves to some extent by consuming other forms of energy, including that generated by electric circuits and even that generated by the Human brain; but still require sources of radioactivity to prevent themselves from starving in the long run. After their planet ran out of radiation, the aliens were forced to relocate themselves to space and seek out other potential food sources.

When starved of their natural sources of radiation, the aliens need to consume large amounts of it, such as the energy generated by blowing up nuclear waste.

Since the aliens consume energy, using energy-based weapons against them is useless, and actually makes them stronger.

The Bringers of Wonder can survive just as well in an oxygen atmosphere as in the vacuum of space. When they die, their bodies simply fade into thin air.

Retrieved from "https://aliens.fandom.com/wiki/Bringer_of_Wonder?oldid=193668"
Community content is available under CC-BY-SA unless otherwise noted.