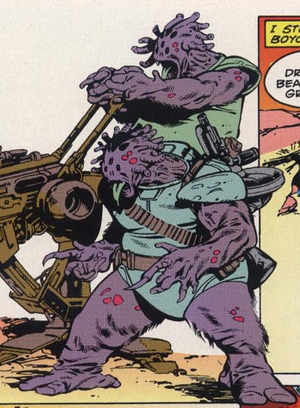 Alien Legion
The Breegs are an alien speices from the Kalon Galaxy.

A lumbering gray skin bipedal race with tendril-like appendages on their skulls.

A group of Breegs attempted to annex the planet Alvar 9 to use as a staging ground to raid other worlds. The Alvarian World Guard and Nomad Force worked together to drive the brigands off-plant.

Retrieved from "https://aliens.fandom.com/wiki/Breeg?oldid=160679"
Community content is available under CC-BY-SA unless otherwise noted.