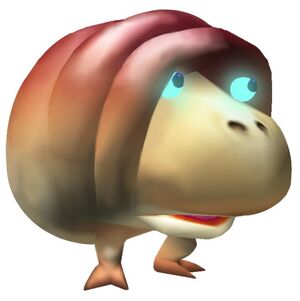 The Breadbug is an omnivorous scavenger well known from many expeditions to PNF-404. These creatures are the namesake for the Breadbug group, being the first one promptly identified (second by technicality if including the Dwarf Bulborbs).

Breadbugs are small to medium sized animals, typically the size of a Dwarf Bulborb. Breadbugs are stocky with small legs, and a circular muzzle with molar teeth inside, their teeth designed for chewing various organic materials. Their backs are covered in a hardened skin covering that apparently resembles the pattern of a small biscuit, partially where it got its name from.

Despite its seemingly harmless appearance, Breadbugs are actually very strong and capable of dragging meals three times its own size back to its den.

The Breadbug is a adaptive opportunist when it comes to survival, much of its resources from other animals than from itself. The burrows they're mostly found in, for example, are often abandoned Hermit Crawmad dens.

Incapable of hunting on its own accord, it's better adapted to take carcasses of kills made by other predators and bringing them back to its den to eat in peace. This same habit is extended to fruits and other resources that Pikmin often compete with it for, and while most Pikmin can't surpass its hard-skinned body, there were reports of Breadbugs becoming overwhelmed and turned into food by a excessively large group of Pikmin.

Some reports even stated that it will bring back dead bodies of its own species to eat, making the Breadbug a rare case of cannibalism.

Retrieved from "https://aliens.fandom.com/wiki/Breadbug?oldid=169453"
Community content is available under CC-BY-SA unless otherwise noted.