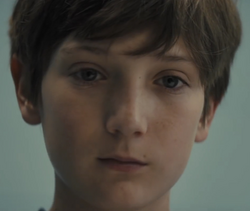 Blue (can change into a bright shade of red by using his laser vision to intimidate his victims.)

Taking over the world, and killing anyone who irritates him.

Brandon Breyer also referred to as Brightburn, is the name was given to a human-like alien being adopted by the Breyer family on Earth.

Brandon Breyer has the physical anatomy mirroring that of a human being. His outfit, later on, consists of a reddish hood/cape, sewn together over the mouth with eye holes.

Brandon Breyer, even for his age, has shown a high level of murderous intent to his actions, often times hurting and killing others purely out of anger, and in some cases with little provocation. Many of these traits were emphasized not long after the discovery of his powers.

Very little is known about his home planet, or who his true parents were. He was found after crash landing on a nearby farm back within a spacecraft in 2006 by the Breyer family, who decide to take him in and gave him his name.

Over the course of the following twelve years, little has shown of Brandon's abilities and he lived his life as a normal human until he discovers his superhuman strength by easily breaking a lawnmower blade on full power. He was also found that following night sleepwalking towards his spaceship until his mother wakes him up. Since this, he began to turn more and more disrespectful and disobedient towards his foster parents. His first act of murderous intent is soon shown one night after he kills all of the farm's chickens.

During school, his next action resulted in a student's hand getting crushed, leaving him suspended for two days. Over this time, his murderous behavior reaches a breaking point and begins a killing spree around the neighborhood, most of the killings involving those that upset him, including both of his parents.

After this, news reports say that he is continuing his killing spree, destroying buildings and killing numerous people all over the world.

Retrieved from "https://aliens.fandom.com/wiki/Brandon_Breyer?oldid=189185"
Community content is available under CC-BY-SA unless otherwise noted.