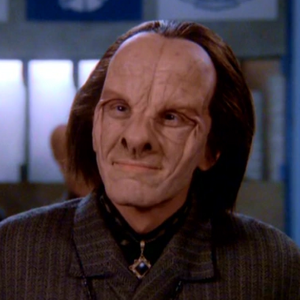 Brakiri are a humanoid species from the planet Brakir that make up a space country known as the Brakiri Syndicracy, formerly a member of the League of Non-Aligned Worlds and later, the Interstellar Alliance.

The Brakiri are naturally nocturnal bipedal humanoids,and can be distinguished from other races by their pronounced bone ridges above the eyes and on the side of the cheeks, large or elongated nostrils and their high, sometimes cleaved foreheads. Like humans, Brakiri have two five fingered hands and two five toed feet. Their hair is generally worn long and unadorned in shades of black, red and brown. Some Brakiri are known to be bald, either through natural hair loss or personal choice. Skin colours can vary from white, beige, yellow, brown, black and light gray.

Like many other species, Brakiri reproduce through the sexual coupling of males and females. Both male and female genitalia consist of an internal phallus that only emerges during sexual contact, the main distinction being that the female organ is somewhat smaller and flatter than that of the male. A female is fertilized by the sliding together of the two organs and the seed is transferred to the egg sac. Once impregnated, the female with carry the developing embryo for the equivalent of 12 to 13 Earth months and will give birth through a canal located in the groin, in a manner very similar to that of Humans. Once fully matured, the average Brakiri will grow to around 90 to 210 cm tall and anything from 48 to 112kg in weight. As a species, the Brakiri have an increasingly low birth rate, indicating them to be K-strategists.

Retrieved from "https://aliens.fandom.com/wiki/Brakiri?oldid=175998"
Community content is available under CC-BY-SA unless otherwise noted.